The town of Pnom-Penh, to which the king had just removed his capital, proclaims itself from a distance by a grand pyramid built on a height, leading the traveller to hope that he is about to come upon another Bangkok, reflecting in a river much nobler than the Me-nam monuments whose singularity is not wanting in grandeur. But the illusion is short-lived for Pnom-Penh is only a crowd of petty wooden and bamboo houses, most of them raised above the grounds on posts, round which pigs and chickens live in a familiarity which brings the inhabitants inconvenience of more kinds than one. A winding street runs from one side to the other of the town, which is pretty populous, and indeed the largest in Cambodgia.

We were presented by Mr de Lagree to His Cambodian Majesty who organised for us the most splendid reception and who wanted us, in accordance with the custom of past entertainments at the court of the great king, to attend a ballet given by the entire corps of his dancers. I myself admired the originality and the elegance of their costumes and the richness of the embroidered silk cloth of which they were composed more than the graciousness of the dance movements or the pantomime expressions of the actors, although from the viewpoint of local color there was something characteristic there for me. The interval of the ballet in which the whole court seemed to take the utmost pleasure, was followed by a light meal in which we participated, with the king. 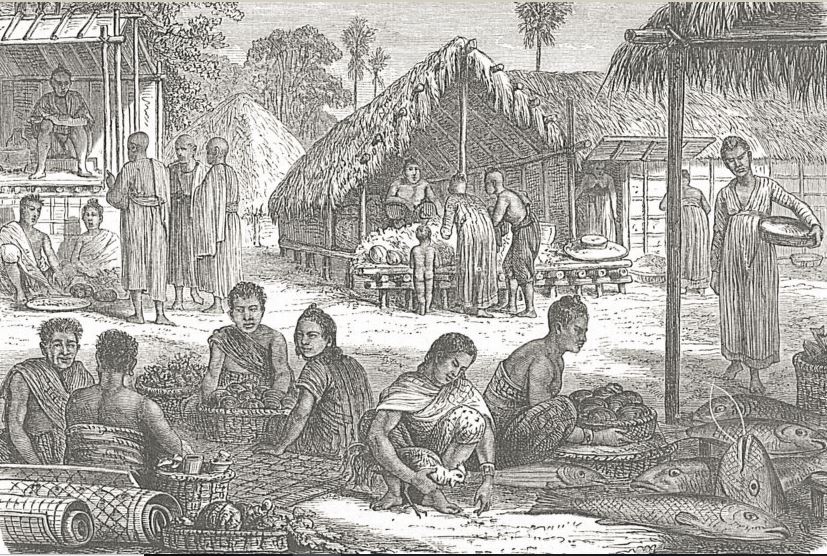 The market at Pnom Penh

The hour of the departure had come. The king made every effort possible to make Mr de Lagree accept a present of one gold bar, a last testimony of his royal munificence. He did not succeed. It was not the first time that French customs, which are so different in this respect from Cambodian customs, surprised him.

At noontime on 7 July, all preparations being entirely completed, gunboat 27, on which all the personnel and all the equipment of the expedition were loaded, and gunboat 32, commanded by Mr Pottier, left the landing of Pnom Penh at the same time. At a certain distance from the Customs point the two gunboats parted after a salute of four cannon blasts from gunboat 32. The flags were brought down as a last signal of farewell; the two crews shouted at the same time “Long live the Emperor! Long live Commander de Lagree!”. A few moments later we sailed alone on the vast river.